A family friendly “drag bingo” event hosted by a pro-LGBTQIA+ church in Katy, Texas drew hundreds of conservative protesters and antifa counter-protesters over the weekend, resulting in some on the conservative side getting pepper-sprayed.

Until word got out, the “all ages” drag event was going to feature “Goth themed” transvestite Tisha F—king Flowers, who was arrested as a teenager for writing a manifesto threatening to torture and kill his classmates.

Harris County Sheriff’s Deputies, who were at the scene in riot gear, attempted to keep the groups separate, but small skirmishes erupted in the crowd, anyway. According to Epoch Times, about 300 conservatives lined the streets with signs and bullhorns, and about 100 black-clad antifa counter-protesters showed up to “champion the church.”

No injuries or arrests were reported.

Portland based journalist Andy Ngo pointed out the irony of the explicitly anti-Christian antifa movement, allying itself with an allegedly Christian church.

The drag event at the First Christian Church (@FCCKaty) in Katy, Texas was a fundraiser for Transparent Closet, its clothing boutique for trans children & youth. #Antifa, an explicitly anti-Christian movement, allied itself with the church to oppose right-wing protesters. pic.twitter.com/IPk7Bi5tr7

The sold-out bingo event was followed by an “adults-only” LGBTQIA+ event at the church later Saturday evening. The events were held to benefit the church’s “Transparent Closet,” a free clothing boutique for LGBTQIA+ youth in the area.

The boutique is for “trans and exploring teens, youth and young adults to have a safe place for clothing needs and beyond,” according to the church’s website.

The closet, which includes chest binders, underwear, and bras “is setup in a way that is designed to keep parents uninformed,” wrote Ft. Worth-based conservative journalist Tayler Hansen on Twitter. Hansen was given a tour of the closet, and clandestinely filmed what he saw until he was discovered and ushered out by Katy Police.

“We’re trying to get more binders, and things like that,” a church official said.

A look inside of First Christian Churches “Transparency Closet” in Katy, TX.

The closet is setup in a way that is designed to keep parents uninformed.

Chest Binders, Underwear, and Bras can be found.

I was removed by Katy Police (Security) after the Pastor saw my phone. pic.twitter.com/fb789uOfXM

Hansen said that until he was discovered, one of the church employees “continuously made sexual remarks towards me and another attendee inside.”
He said unattended children were also given tours of the closet “throughout the entire event.”

The church handed out pins to attendees that read, “Not All Christians Suck.”

Unattended Children were receiving tours of the closet throughout the entire event.

Church Worker #2 continuously made sexual remarks towards me and another attendee inside. https://t.co/ws6Tchmtwf

A conservative who was able to infiltrate the “all ages” transvestite bingo event, said it was “basically a drag show,” and “kids were handing them money.” The man said “there were comments made in a sexual manner.”

“It wasn’t overtly sexual, but it was way more than a kid sought to be in the middle of,” he said.

The man told Hansen that church workers were “going around the tables” asking if people wanted to take a tour of the closet. He said he saw about eight younger children, and about five teenagers.

Kelly Neidart, founder of Protect Texas Kids, and de-transitioned activist Kevin Whitt spoke with Hansen outside of the church.

One of the two transvestites that had been scheduled to be in the show, they said, was arrested when he was a teenager “for trying to shoot up a school.”

When he was 17, Jaysen Kettl, a goth-themed transvestite who goes by the stage name “Tisha F—king Flowers,” was reportedly arrested and sentenced for conspiracy to torture and murder 20 of his classmates. In a spiral notebook, Kettl and at least one other student detailed on about 12 pages how they were going to torture some people by “nailing their hands to the table, chaining them to trees,” before killing them, the Houston Chronicle reported at the time.

Kettl has posted numerous pictures of himself with satanic imagery on his social media. Judging from the photos, he appears to be a member of the Satanic Temple. 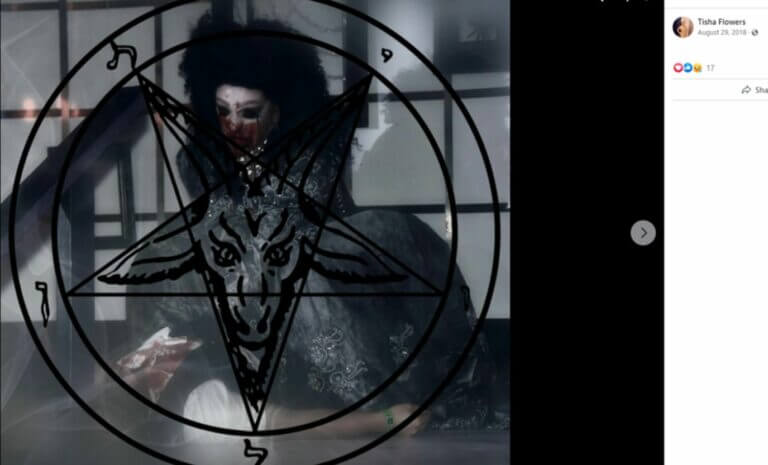 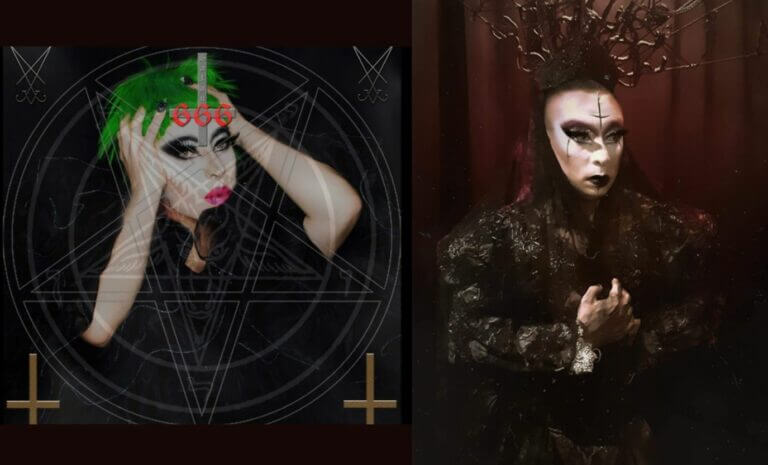 During a drag performance in October of 2016, he flicked his tongue, and grabbed his crotch while lip synching to an audio recording of the demon in the classic horror movie The Exorcist. Another repulsive video shows him gutting another performer, and pulling out her intestines on stage.

After word got out about Kettl’s decidedly un-Christian background, the church canceled his appearance, claiming they’d made a mistake, but his Satanic social media posts and videos were publicly available for anyone to see.

“Everything about this show is really disturbing,” Neidart said.

She told Hansen that the antifa protesters defending the event were “clearly not well,” and that “really speaks to what is going on in there.”

Next I spoke to @KevinWhitt45, a de-transitioned activist with the goals of protecting children.

He tells me that the Drag Queen originally scheduled and featured on the flyer was arrested in high school for allegedly attempting to carry out a mass school shooting. pic.twitter.com/PNzYy0po0N

Content created by the Center for American Greatness, Inc. is available without charge to any eligible news publisher that can provide a significant audience. For licensing opportunities for our original content, please contact [email protected].